One of the major themes for local investors in 2018 is the fall in the Australian dollar, and it’s not just Aussie travellers heading overseas who are affected. Currency movements can have a big impact on your investment returns, but where there’s risk there’s also opportunity.

The Aussie dollar has dropped from a high of US81c in January to recent levels around US74c, its lowest in 18 months. So, what’s behind this decline and will it continue? 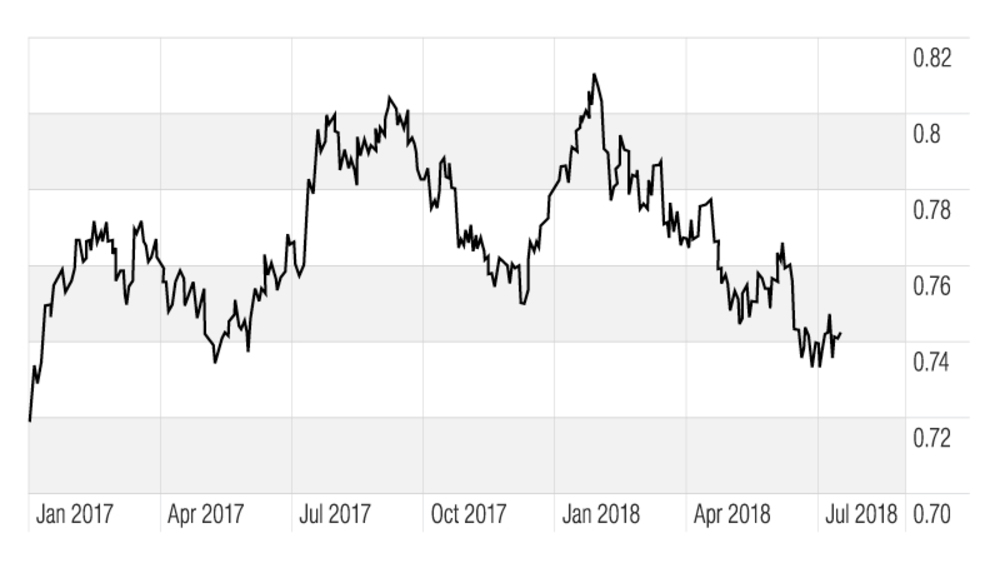 There are two sides to every story, especially in currency markets where one currency’s loss is always matched by another’s gain. The US dollar has been rising against most other currencies this year, including ours. Part of the reason for this is the increasing interest rate differential between the US and the rest of the world.

The US Federal Reserve has lifted rates seven times since late 2015 from near zero to a range of 1.75-2.0 per cent. Federal Reserve chairman, Jerome Powell has said he expects to do so twice more this year and three times in 2019. The return to more ‘normal’ interest rates is due to solid growth in the US economy and unemployment below 4 per cent. The Fed forecasts economic growth of 2.8 per cent this year although inflation is still below its target of 2 per cent.i

By comparison, Australia’s official cash rate has fallen over the same period and sits at an historic low of 1.5 per cent. Commentators expect the next move will be up, but possibly not until late next year.

Higher US interest rates relative to Australia make the US a more attractive destination for yield-seeking investors. As foreign money flows into the US market, demand for the US dollar increases and its value rises.

Also weighing heavily on the Aussie dollar are the threat of an escalating trade war between the US and China and falling commodity prices, notably iron ore.

The tit-for-tat tariffs placed on imports by the world’s two biggest economies has the potential to impact the Australian economy more than most. Australia is viewed as a resources-based economy and any rise or fall in commodity prices tends to be reflected in the value of our currency.

When the first salvos in the trade dispute were fired in July, iron ore was trading at around US$63 a tonne down from a high of US$78 earlier this year and a peak of US$197 back in 2008. Australia is the world’s biggest exporter of iron ore, most of it headed to China for steel production.

China’s growth eased slightly in the June quarter to 6.7 per cent, the slowest in 21 months, along with slower than expected industrial output.ii If tariffs put a dent in China’s economic growth and demand for iron ore, our dollar could head lower.

While currency movements are just one factor influencing investment returns, it pays to understand the impact of a falling dollar in order to capitalise on the benefits and reduce currency risk.

For local share investors, a drop in the Australian dollar is good for exporters and companies with offshore operations because it improves their competitiveness in overseas markets. Companies in the agricultural and manufacturing sectors stand to gain as do mining companies with commodities priced in US dollars, although this would not be enough to offset falling commodity prices.

Surprisingly perhaps, the currency effect can also increase the appeal of global shares. Local investors who own ‘unhedged’ global shares have already enjoyed the double benefit of rising international share prices and a falling Aussie dollar. Some global share funds ‘hedge’ currency risk while others leave the risk ‘unhedged’. Hedged returns perform better when the Aussie dollar is rising or flat while unhedged returns do better when the dollar is falling.

While currency risk can be a challenge for share investors to manage, one of the biggest risks when the Aussie dollar is falling is to leave all your cash in the bank. At a time when historically low interest rates have already reduced the amount you receive from cash investments, your purchasing power is further reduced when you buy overseas goods.

Given the ongoing uncertainties for global trade and the growing interest rate differential between Australia and the US, the Aussie dollar is unlikely to rise in the near to medium term. While investment decisions should never be based on currency factors alone, understanding the impact of a falling dollar can help you minimise currency risk and make the most of opportunities.

If you would like to discuss your investment strategy, give us a call.